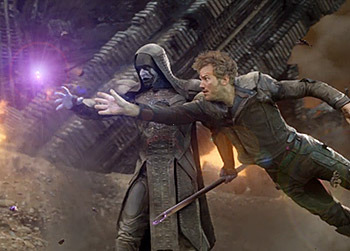 "I got it, I got it, I-AAAAAAAAAARGH!"
"I leap forward, arms outstretched. Reaching, reaching across endless feet. Hitting the carpet, feeling my chest and stomach burn. Straining my fingertips. The remote falls into my hand, undamaged."
— Odysseus, The Victors Project
Advertisement:

Sometimes, it's not gunfire that sends a hero desperately dropping prone. Sometimes, they'll do it to intercept an object that absolutely must not strike the floor. Maybe a cornered villain just tossed a vial of The Plague in an attempted mass Taking You with Me. Maybe an explosive's detonator got dropped in the struggle to subdue a bomber, and contact with the ground could trip its trigger. Maybe it's a Macguffin that's needed to defeat the Big Bad, and one hero must throw it to another if it's to be activated in time. Or maybe it's just a Priceless Ming Vase that tips over and will shatter unless it's caught. Whatever the case, it's down to a quick-acting character's reflexes to intercept the item and save the day.

Sometimes Played for Laughs by having a character catch a non-essential falling object with just as much drama as if the situation were life and death, even if all that's at risk is a nice clean floor. Occasionally subverted when the thrown object turns out to be harmless, such as when Drill Sergeant Nasty tosses a dud grenade at trainees to watch how they react.

Sister trope to Catch a Falling Star, when it's a falling character that has to be caught in mid-plummet. Sometimes the follow-up of a Dramatic Drop, and a potential finale for many Sports Stories. A common complication during a "Mission: Impossible" Cable Drop. Dish Dash is a mass comedy version.

Likely to be shown in Slo Mo and to overlap with Diving Save. Failed attempts often lead to Dramatic Shattering.

Payapi tries to burn Amato's house by tossing a match into some oil he spilled earlier. Mara jumps out of her wheelchair to catch the match in time.

Payapi tries to burn Amato's house by tossing a match into some oil he spilled earlier. Mara jumps out of her wheelchair to catch the match in time.