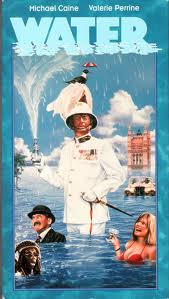 England wants the island dumped.
France wants it bombed.
America wants it wholesale.
And Michael Caine wants it...
On the rocks.
Advertisement:

Baxter Thwaites (Michael Caine) is governor of Cascara, a long-forgotten British colony in the Caribbean. His peaceful life is disturbed only by his shrill wife Dolores and the Cascaran Liberation Front — a rebel group that no one takes seriously because it only consists of two people, one of whom (Delgado Fitzhugh, played by Billy Connolly) communicates solely through (bad) singing.

But when an abandoned oil rig starts delivering pure mineral water, Cascara suddenly has a valuable resource that Downing Street, the White House, French mercenaries, Cuban guerrillas, and an American oil company will do anything to obtain.