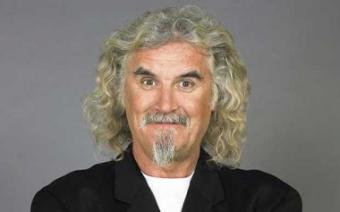 Surprisingly, he isn't John Cleese...
"I've always been fascinated by the difference between the jokes you can tell your friends but you can't tell to an audience. There's a fine line you have to tread because you don't know who is out there in the auditorium. A lot of people are too easily offended."
Advertisement:

Sir William "Billy" Connolly (born November 24, 1942 in Glasgow), is a Scottish folk musician, actor and stand-up comedian. Commonly known as "The Big Yin", he has a large fanbase and was voted Number One on Channel Four's One Hundred Greatest Stand-Ups in both 2007 and 2010. He's married to Pamela Stephenson (who was a cast member on Not the Nine O'Clock News and Saturday Night Live in the 1980s. Stephenson is now working in psychology) who he first met while he was making a guest appearance on Not the Nine O'Clock News.

Connolly was diagnosed with Parkinson's disease in 2013, which led to his retirement from performing comedy in 2018. He is now an artist.

He was nicknamed "The Big Yin" (Glaswegian slang for "The Big One") - he stood over 6 feet tall in his prime - though rarely heard today.