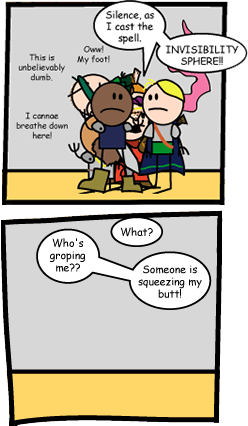 Stock Phrase(s) for whenever a group of people are squashed together. It also commonly occurs whenever the lights go out. Variations on the phrase include "Who's touching my X" and "Whose X is this?". There's also the Double Entendre variant:

Said item is usually either phallic or soft depending on who the people are. Can result in Thanks for the Mammary, a Megaton Punch (if person #2 is female), as well as evidence against the Accidental Pervert. Not What It Looks Like also commonly occurs when the lights come back on. Not to be confused with Flirtatious Smack on the Ass. Often overlaps with Joke of the Butt.