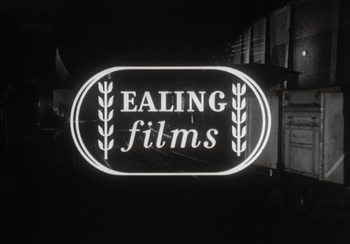 Ealing Studios was the name of a British film production company best known for a series of comedy films produced in the decade after the end of World War II.

The original Ealing Studios, founded in 1931, was not a production company at all; it was merely the Ealing Green studio of a small-time production company named Associated Talking Pictures. (The history of film-making in the London borough of Ealing dates back to almost three decades earlier.)

A management shake-up in 1938 led ATP to change its name to Ealing Studios. The new head of production, Michael Balcon, took the then-struggling production company in a new direction, bringing in gifted writers, directors, cinematographers and actors, though keeping the company on a small scale. The films you probably associate with the name Ealing were made while Balcon and his high standards

were in charge. It was his goal to make pictures that evoked the very feeling of British (especially English) culture, such that you'd hear "Ealing" and think tea and crumpets and the best things about the Good Old Ways.

of postwar austerity, along with award-winning war pictures using documentary filmmakers and techniques.

The studio facilities at Ealing were sold to The BBC in 1955, and the company continued to make a trickle of films at Borehamwood until 1959. Ealing Studios was revived anew in 2002

. Today, they make films and television series (Shaun of the Dead, Downton Abbey), with an eye to innovation, sustainability and the latest visual and sound recording technology.

explores the history of this influential company. More about this documentary on the BFI website.

Films produced by this company include: