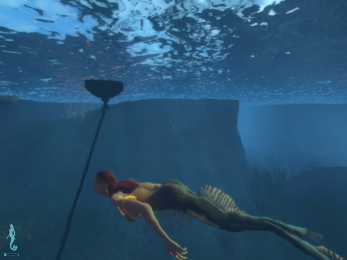 Your character, the water goddess.
Water

is an artistic Half-Life 2 mod that fuses adventure, puzzle, and stealth game mechanics together in one. You take control of the goddess of the sea, one of the sister goddesses who founded the world.
Advertisement:

When you awake you discover that fishmen have forsaken the ocean and nature itself to live in a steampunk style theocratic metropolis, founded and led by an enigmatic religious leader. While apparently once a true shining city, by the time you awake conditions in the city are corrupt and miserable. Quickly it becomes obvious the endless misery inflicted on the fishmen is most likely intentional, but by whom and for what reason is up to you to find out.

Over the course of the game you must help the miserable citizens with their problems, ranging from comedic to tragic, and solve puzzles. Water can possess people, move through pipes, enthrall people to take her orders, and transform into her namesake liquid to do anything that actual water can do (IE: store yourself in a barrel, slip through grates, follow pipes, etc.)

Unusually for a source-mod game, the story has high quality cutscenes. Even more unusually, they are told in a charmingly rustic style that looks like a puppet show with hand painted cardboard marionettes.