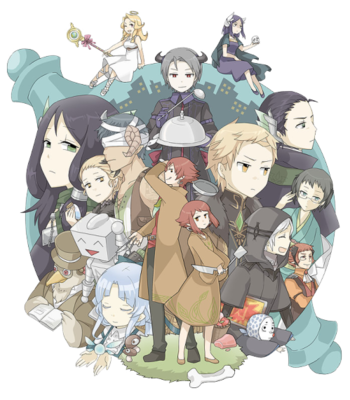 "No matter the planet, no matter the species, they get hungry, and they cook."
Advertisement:

Walking on a Star Unknown (Japanese: Shiranai Hoshi no Arukikata) is a "heartwarming cooking adventure game" created by Segawa in RPG Maker 2000.

Fukuro and Eddie Owul, a pair of siblings, travel through space to deliver intergalactic home-cooked dishes in spirit of their late mother, whose wish was to spread delicious food across the cosmos.

One fateful day, their spaceship crashes onto an unfamiliar planet called Calpucca. This planet is having a cooking tournament, called the Gourmeet competition, where aliens come to share their dishes to be judged. The winner is granted one wish, and the siblings, knowing this is their chance to wish for their ship to be fixed, enter the tournament.

The duo befriends numerous aliens and residents of Calpucca along the way, some of whom hold mysterious pasts of their own. Calpucca itself holds many secrets, having once been at war with aliens from another planet that they call "starlings".

In the spirit of Segawa's previous, much darker games, the surreal, creepy side content is plentiful, however, it is infinitely more cheerful than its predecessor.

The English translation, provided by vgperson, can be found here

, while the Japanese original can be found here.

Walking on a Star Unknown contains examples of: