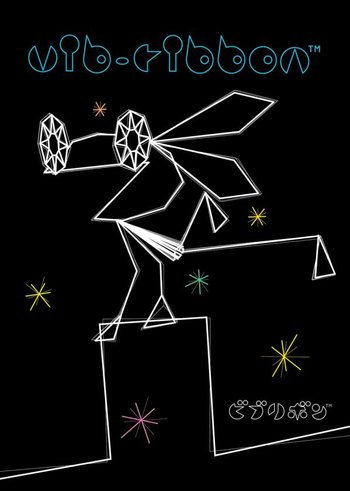 The rabbit with sass.
Walking by the ribbon
Luck is by my side.
Raindrops falling on me
I have no umbrella
— Laugh and Peace, Polaroid, or at least what it sounds like
Advertisement:

Vib-Ribbon is a Rhythm Game produced by NanaOn-Sha of PaRappa the Rapper and Um Jammer Lammy fame, and released for the Sony PlayStation. In it, you have to guide a rabbit named Vibri across a mobius strip called the Vib-Ribbon, dodging obstacles along the way. There are four basic obstacles (spikes, blocks, loops, and pits), which can further be combined into a dual obstacle (for example, spiky loops and blocks with pits in the middle). The obstacles appear in time with the music, and reaching the end of the song means reaching the end of the stage. Hitting too many obstacles causes Vibri to devolve (from rabbit to frog to worm to game over), although successfully navigating ten in a row causes Vibri to evolve back up (and potentially go from rabbit to princess).

The game is distinct for two reasons. One, it's a Vector Game - despite when it was developed, it runs entirely on vector graphics. While not monochrome (the scale at the bottom showing remaining time and the scoring gems are in color), it is a throwback to the primitive graphics of the early 80's.

The second, and perhaps most significant, is that it can make a level out of any CD track.note Well, every CD track that's not the first one. Because the first track of a CD-ROM disc, Vib-Ribbon's included, contains ROM data, playing it back in a CD player can potentially damage the speakers thanks to the data on it translating to frequencies outside of most commercial speakers' limitations. Because of this, Vib-Ribbon locks the player out of playing the first track of any CD, just to prevent them from trying to play back Vib-Ribbon itself. This measure was removed in the PS3 port, which allows you to play the first track. Because the actual coding for Vib-Ribbon is so sparse, the entire game itself fits on the PlayStation's RAM, allowing the player to swap out the game disc for any CD to be read and its songs converted to levels. Moreover, the six built-in tracks to the game are also in CD format, so the game is already its own soundtrack.

Vib-Ribbon was followed up by two sequels: Mojib-Ribbon, which could make PaRappa-style rap levels out of .txt files, and Vib-Ripple, which turned digitized images into hidden object games. Neither were released outside of Japan, the former most likely for being near impossible to localize. The original finally became available for download on the Play Station Network in North America on October 17, 2014, a solid 15 years after its initial release.

Well done! Way to go!
Nice one. Congratulations!
The tropes page score is...
19 tropes
And yes! It's a high score.
Yippee!