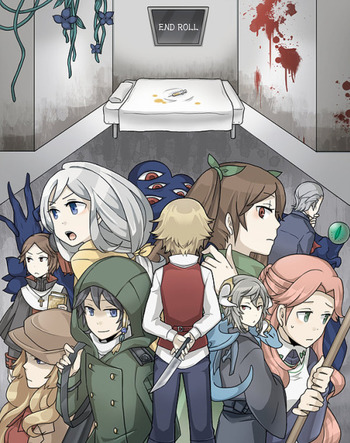 End Roll is a freeware RPGMaker 2000 game published in the summer of 2016 by a developer named Segawa. Described as a "regretful adventure RPG", it follows a fourteen-year-old murderer named Russell on his journey of depressing self-discovery in the world of his dreams with the help of an experimental drug called Happy Dream. Normally, Russell would have been given the death penalty for his crimes, but, in order to perfect their drug - which has never successfully worked before - and to try to reform Russell, the creators of Happy Dream managed to get him into their program. Now, he must inject himself with Happy Dream every morning to see if he, a boy described as emotionless, is capable of figuring out what guilt and remorse are and whether he can feel guilty about the horrible crimes he's committed by interacting with the ghosts of his past in his dreams.

He only has seven days to complete the task the Happy Dream Project has challenged him with, and if he succeeds, he'll be spared the death penalty and walk out of jail a free boy. Of course, if he fails, he dies. Not that he really cares one way or another. It's all the same to him. Life or death, he's miserable either way.

In his dreams, Russell finds the community and friends he'd always wished for in the waking world and starts feeling and discovering new, painful things, which seem to point to success for the experiment. But how much guilt can a person handle, especially if they've killed multiple people?

The game, in its original Japanese, can be downloaded here