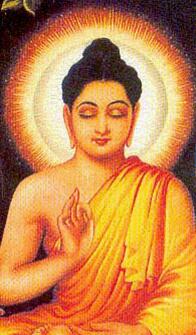 Every deity should have one!note Or Bodhisattva in this guy's case
"The halo is a purely optical illusion, produced by moisture in the air, in the manner of a rainbow; but the aureola is conferred as a sign of superior sanctity, in the same way as a bishop's mitre, or the Pope's tiara. In the painting of the Nativity, by Szedgkin, a pious artist of Pesth, not only do the Virgin and the Child wear the nimbus, but an ass nibbling hay from the sacred manger is similarly decorated and, to his lasting honor be it said, appears to bear his unaccustomed dignity with a truly saintly grace."
— Ambrose Bierce, The Devil's Dictionary
Advertisement:

Either a gold ring floating over someone's head, or the more traditional shimmer of light like someone is holding a flashlight behind a character's head. In fiction (and lots of classical art), halos are basically synonymous with holiness and extreme good. It means you're either God, a non-denominational equivalent, an angel, a saint, a buddha, the Messianic Archetype or a soul of the dearly departed in Fluffy Cloud Heaven (the real Heaven isn't quite so tacky). Although the term "halo" only dates back to the 17th century the trope itself is ancient, in the middle-ages it was known as the corona gloriae ("crown of glory") in Europe. While in the West it is associated with Christian iconography, halos are also a part of Muslim, Buddhist, and other religious art. Traditionally, the presence of a halo on someone in art means they are inhabited with the Holy Spirit because of their great virtue.

Therefore, anyone with a halo is usually chosen to, either by a deity or the cosmos in general. So it shouldn't come as a surprise that anyone with a halo hovering overhead is also likely very, very powerful — Power Glows, after all. Either as a pre-requisite to appearing or a side effect of being chosen by on-high, the character will be capable of miracles... and kicking butt! Expect it to be associated with Elemental Powers of Light and/or Holy, and cause fear and pain to the evil in their presence. Exceptions of course are when Light Is Not Good, and the decidedly evil character (maybe a fallen or One-Winged Angel?) decides to ape the good guys as a way to mock them.

Holiness aside, some characters can wear an "artificial" halo without ever being remotely religious or even spiritual. Energy powered Super Heroes (and Super Villains) may create Battle Auras around their head (or entire body) related to their power, like Green Lantern or Apollo. Interestingly, robotic characters may be built with mechanical halos that can shoot Reverse Shrapnel, or double as Deflector Shields. Further, evil characters may create "negative" halos of darkness around themselves, paired with Face Framed in Shadow along with Glowing Eyes of Doom and a red Throat Light.

Often paired with Power Gives You Wings, Anti-Gravity Clothing (when the halo is a floating circlet).

See also Unusual Halo for non-standard halo designs and their connotations for their bearers.

A Sub-Trope of Power Glows and Sister Trope to Holy Backlight and Battle Aura. See also Background Halo, when this is an Invoked Trope. Contrast Horned Humanoid. Not to Be Confused with the video game series Halo, although the parallels are intentional.