Western Animation / The Spirit of Christmas 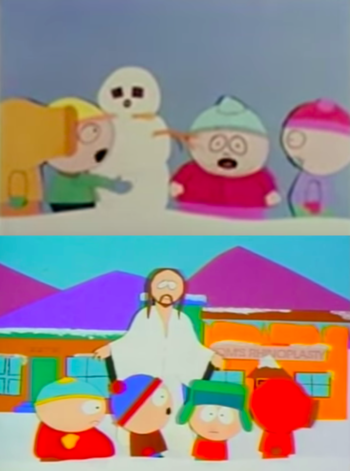 South Park at its crudest...animation, that is. The comedy would get much cruder over the years.note Above: Jesus vs. Frosty. Below: Jesus vs. Santa.
Advertisement:

The Spirit of Christmas is a series of two Christmas shorts created by Trey Parker and Matt Stone. The two shorts are entitled Jesus vs. Frosty and Jesus vs. Santa, which were released in 1992 and 1995 respectively. The [in]famous animated series South Park spawned from these shorts.

In Jesus vs. Frosty, four boys who vaguely resemble the South Park main characters build a snowman, which comes to life when they put a hat on its head; unfortunately, it's Ax-Crazy, grows tentacles and kills proto-Cartman and proto-Kenny. The remaining two decide to ask Jesus (depicted as a baby with an adult Jesus' head) for help; he throws his halo like a boomerang at the snowman and knocks its hat off, rendering it lifeless.

In Jesus vs. Santa, the style is much closer to South Park, with the boys all having their eventual names and looking like themselves. Here, an adult Jesus descends from the sky and asks they to take him to Santa Claus; sure enough, the local Mall Santa is the real thing, and the pair begin to fight about whether the true meaning of Christmas is religion or giving. Ultimately, the boys get advice from Brian Boitano

and help the two reconcile.

The shorts can be seen here

; the latter can also be seen on the South Park The Hits: Volume 1 DVD, and, as a Mythology Gag, was featured in the plot of the episode "A Very Crappy Christmas." (Jesus vs. Frosty was briefly alluded to in "Simpsons Did It Already.")