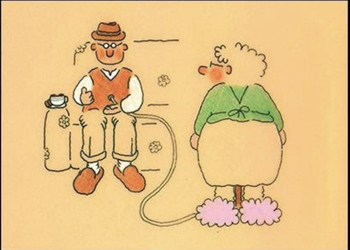 An old lady toddles off to the mailbox and sends off a letter. She toddles back to the home where she clearly lives alone. This becomes relevant when she receives a package, which turns out to be a blow-up doll. Not a sex doll, but rather a blow-up doll of an old man.

Alison Snowden's first film, made when she was a student at The National Film and Television School. Nick Park, also a student there, was an animator on the short.