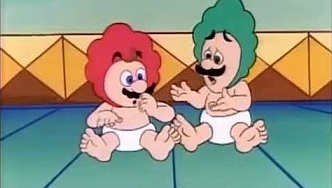 Or rather, ''mustachioed" baby.
"Some babies are born bald... but Mario was born with a full head of hair, and a full face, too!"
— Nintendo Comics System, "Family Album: The Early Years"
Advertisement:

A baby is born, shows up on screen, or someone becomes one through a Fountain of Youth. But wait, what is that on their face? Facial hair? How is that possible?

Usually in infancy, except for their hair on their head, a baby is too young to have anything resembling a beard or a moustache. Yet, somehow, some of them have one despite the lack of hormones and other substances within their body needed to grow one, and most of the time it goes ignored by the other characters.

A Visual Gag usually Played for Laughs. May overlap with Gonk if it is used to make a baby intentionally not cute and Girls with Moustaches if the baby is a girl. May also result from Strong Family Resemblance if it runs in the family or Beard of Evil if its used to mark the infant as evil, usually in the form of a Dastardly Whiplash.

Surprisingly this can happen in real life. A medical condition known as precocious puberty

can result in a child starting puberty much sooner then usual. In extremely rare cases this can go so far as a boy entering puberty, including growing facial hair, before they're one year old.