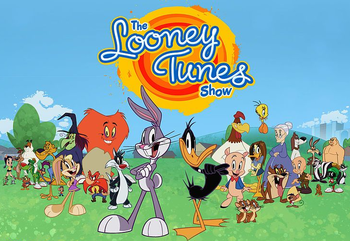 A show that premiered in 2011 on Cartoon Network as another recent attempt at reviving the Looney Tunes and Merrie Melodies franchise. This time, the classic characters are placed into a low-key, Slice of Life sitcom, where Bugs Bunny is stuck sharing a house in a suburban neighborhood with a freeloading Daffy Duck, and the rest of the Looney Tunes are all neighborhood friends. Taz is Bugs' pet, Yosemite Sam is the annoying neighbor, and Speedy Gonzales runs a pizza place (and lives in Bugs' house). Wile E. Coyote and the Road Runner are still in their own separate shorts in the desert, but are computer animated this time. note  but still make a few cameos in the regular show, such as Wile E. being in the therapists waiting room in "Point, Laser Point" Both are interspersed with Merrie Melodies original music videos showcasing other characters.
Advertisement:

After several delays, it finally premiered on May 3rd, 2011. The second and final season premiered on October 2nd, 2012, where the characters were slightly redesigned and the CGI Road Runner cartoons were discontinued. Having mixed reviews and lukewarm ratings during its run, the show was put on hiatus in 2013. It was followed by Wabbit: A Looney Tunes Production in 2015.

This show is not to be confused with the Cartoon Network installment show that aired the original shorts.

Out of nowhere, Warner Bros. Animation announced a DVD/digital-only The Looney Tunes Show movie coming in 2015, about Bugs and Lola Bunny globe-trotting the world to retrieve an invisibility spray Lola invented before their enemies get hold of it first. The result, Looney Tunes: Rabbits Run, wasn't directly related to this series, but was similar enough to serve as a Stealth Sequel.