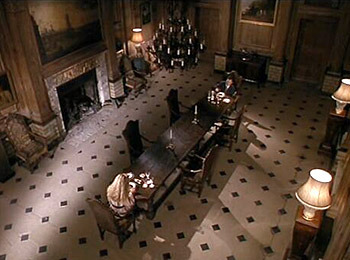 Could you pass the salt?
"The comic convention, when two people are dining at a table designed to accommodate twenty, is that they sit at either end."
— Making Money
Advertisement:

Two people, surrounded by wealth and opulence, sit down to dinner at a table that is long enough to seat an entire NFL team. Rather than doing the sensible thing and sitting close together, they sit at the far ends of the table.

Often just a visual gag, but in more serious uses the distance between the two is used to illustrate the emotional distance between them, especially if this is a result of their opulent but hollow lifestyle. Also often overlaps with Formal Full Array of Cutlery.

It should be noted, most residences that are opulent enough to be able to house such a table also have multiple dining rooms, with a more simple and imtimate room and table being used for everyday dining.