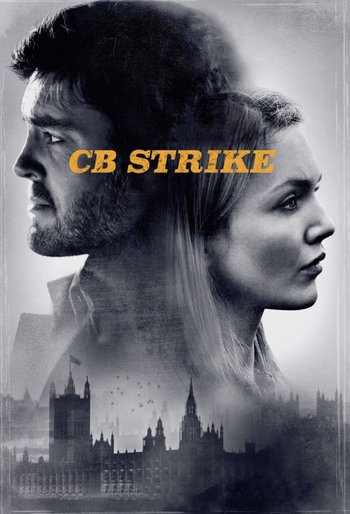 "You and me
Me and you
Somehow we made it through"
— "I'll Walk Beside You", opening theme
Advertisement:

Strike (known as C.B. Strike in North America) is a British Detective Drama by the BBC based on the Cormoran Strike Novels written by J. K. Rowling under the Moustache de Plume Robert Galbraith. It tells the adventures of a war veteran turned private detective named Cormoran Strike, who with the assistance of his eager secretary Robin Ellacott, applies the experience and skills he acquired as an Special Investigation Branch investigator to solving high profile crimes in a London which have eluded the police.

The first five seasons adapted each of the Strike novels in turn:

It was first broadcast on BBC One on 27 August 2017, after receiving an advance premiere at the British Film Institute on 10 August. The series premiered on 1 June 2018 on Cinemax in the United States and on HBO in Canada. Starting with Lethal White, the series moved to HBO in the US after a corporate restructuring at Warner Media. The fifth series is set to go into production in early 2022.