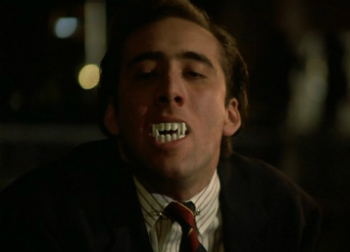 Everybody wants to be a bat...

Vampires are surrounded by humans who, while they haven't been bitten, do their masters' bidding in the hope that they will be. Sometimes they're under some sort of mind control, but often they're just willing vampire groupies. How likely their loyalty is to actually be rewarded depends on the vamp, however — they might be exploiting this trope as a not-so-Secret Test of Character in order to keep the bloodline pure.

The wannabe's desire can be justified, if the work's version of vampires are Cursed With Awesome, gaining great powers and few if any weaknesses. This can lead to Moral Dissonance if the wannabe is portrayed as a foolish coward regardless of this — perhaps because being a vampire is just inherently evil. Or possibly because the Vampire Wannabe leaves him-/herself wide open to a Pretender Diss, whether from actual vamps or their enemies.

Can work as a deconstruction of the exponential population growth that would result from the more common "everyone bitten becomes a vampire" model — in this case, the familiars may be feedstock as well, with conversion requiring some more complicated ritual the vampire can choose to initiate.

Polar opposite of I Hate You, Vampire Dad, although that can be the end result if the gig isn't all it was cracked up to be. These characters are often Goths, at least in their minds, and always Les Collaborateurs, usually Working for a Body Upgrade. Compare The Renfield, Transhuman Treachery. Contrast Super Loser, when being a vampire is no guarantee of coolness, and Emergency Transformation, when the person might or might not want to become a vampire or other monster but basically has no alternative. If they are seeking to be bitten by a vamp, they are a Voluntary Vampire Victim.

Because a bat's the only bat who knows where it's at...