Treasure Is Bigger in Fiction 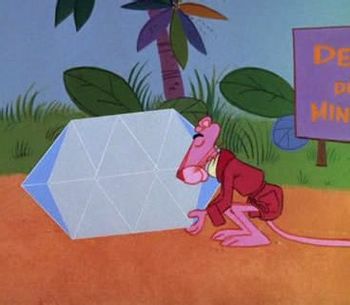 "That is nearly ten tons in gold. It does not have to look big."
— Mr. Bent, Making Money
Advertisement:

Next time you get a chance, pop into your local jewelry store and take a look at the gems. Notice anything about them? They're all tiny, on the order of the size of a pinhead. If you pried every stone in the place loose from its setting and piled them up, the entire heap would probably fit in a soup pot. (And then you would be arrested, but that's beside the point.)

In Real Life, gem-quality stones larger than a person's fingernail are so rare that they are almost never for sale on the open market. This doesn't apply in fiction, where a single gem can easily be the size of your fist... head... torso... you get the idea. It's also not very uncommon if gems that are mined are already cut.

When it comes to gold, the problem is not size (unless you're talking City of Gold or Pooled Funds quantities) but weight. Most of us only ever see gold in tiny quantities (and usually alloyed with lighter metals) so it's hard to notice that it's more than twice the density of lead. A standard gold bar weighs about thirty pounds, so if the guys pulling off The Caper are carrying more than one or two at a time, they're not going to be hard to catch. For reference, $1 million (US) worth of gold is just two Good Delivery (i.e. "standard") gold bars and weighs a bit more than 53lbs. (€1 million worth of gold is about 2.5 bars and masses about 30 kilograms) note  This is using June 2018 prices.

In Video Games, it gets even more ridiculous. Not only are gemstones enormous, but the same thing largely applies to money or even pieces of jewelry, especially in platform games. In video games, this is also often done for convenience because finding coins, jewelry or rings as small as a thumbnail can be rather hard since that would often mean that they would take up a space of a size less than a pixel. (Compare Units Not to Scale.) Of course, characters themselves have enough hammerspace to fit a lot of them in their pockets.

Additionally there is often some Artistic License – Geology (or possibly Everything's Better with Sparkles) in cartoons referencing valuable minerals, particularly diamonds. In fiction you'll often see a mineral faceted, polished, and/or sparkling straight out of the ground. In Real Life, clean and perfectly formed crystals are rare in nature, and most rough gems (at least to the inexpert eye) just look like dirty pebbles. We call this All-Natural Gem Polish, a closely related trope.

Compare Cheap Gold Coins. Contrast with Enormous Engagement Ring where the extreme size of the gemstone is acknowledged in-universe. Giant Novelty Check could be considered a Defictionalization of this trope. See also Hollywood Density, for when treasure, especially gold, weighs suspiciously little.

Examples of works with huge gemstones:

Examples of works with huge money and jewelry:

Comic Strips
Literature
Tabletop Games
Video Games
Real Life
This planet's a dump anyway. We'll buy a NEW planet and CALL it holy. With cash like this, who's gonna argue? No one, that's who.
Feedback

The Emerald that Henry attempts to steal is absolutely massive. It's not only nearly as large as him, but it's also incredibly heavy. This also applies to the Tunisian Diamond and the Romanian Ruby that Henry stole in previous games.

The Emerald that Henry attempts to steal is absolutely massive. It's not only nearly as large as him, but it's also incredibly heavy. This also applies to the Tunisian Diamond and the Romanian Ruby that Henry stole in previous games.