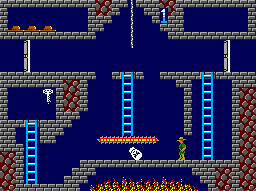 The first screen, from the Sega Master System port.
Advertisement:

Montezuma's Revenge (Featuring Panama Joe) is a 1984 2D Platform Game designed by Robert Jaeger and released by Parker Brothers for various game systems and home computers. In the game, you play Panama Joe, who must explore the tomb of Montezuma and find its fabled treasure room while avoiding spiders, skulls, snakes, laser gates, and deadly fire pits.

It is followed by the 1998 platform game Montezuma's Return.