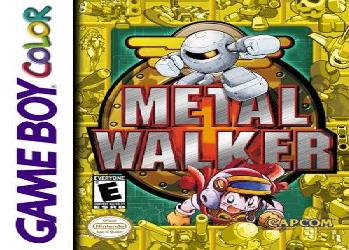 Metal Walker is an Action RPG developed for the Game Boy Color by Capcom.

The story is set in the Rusted Land, a Dystopia of metal and machines. Once it was a pristine place, but it all changed due to a huge explosion 50 years ago. As a result, the landscape became barren, and Killer Robots, Metal Busters, populate the land. Your character finds himself searching for clues to the whereabouts of his missing father, aided by the kindly Professor Hawk, and his Mon, Meta Ball. Along the way he finds Core Units to power up his Metal Walker and further explore the land. A dark secret lays at its center...

While the overworld is similar to most RPGs, the battle system is where the action comes in. Rather than selecting commands, you bounce your Walker around like a pinball to inflict damage. Depending on what form your partner takes, it can bounce for more damage and speed. Bouncing off walls is key to victory. Capsules are also thrown into the battlefield every turn, and may help or hurt you depending on what they do. At first Capsules are thrown in randomly, but later you can choose which ones appear.

Not to be confused with Metal Gear Solid: Peace Walker.