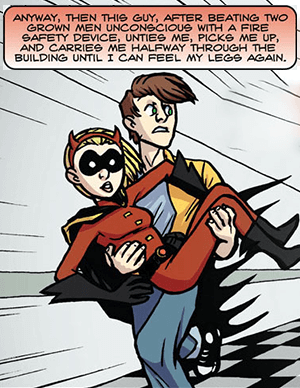 You don't have to be a superhero to be a hero!
When something bad happens, most people gape in fear and shock. They are the Innocent Bystanders. But sometimes one person decides to help out, and in the doing, becomes a hero. That's the Heroic Bystander.
Advertisement:

The Heroic Bystander is not someone who is normally expected to be a hero in time of crisis, such as a police officer or a lifeguard. Instead, it's an ordinary person, with no special training, who happens to save a life through their own inner courage and resolve.

It doesn't have to be a life that is saved. A Heroic Bystander can also defend a person's reputation, distract a villain with a Defiant Stone Throw or help someone out who needs help, when no one else is doing so.

This can be used as a device to show the growth of a character, such as having a cowardly individual show remarkable resolve in coming to someone's rescue. It can show how someone is transformed from a passive outsider to someone who gets involved and tries to help others. Sometimes, it can be used to let a wimp have their day in the sun. Sometimes (especially in real life) a whole crowd will get involved, possibly sparked by one person showing courage to ignite the powder keg.

Of course, those bystanders live in a world that is basically similar to our own. An Anti-Hero of a Crapsack World (who is usually a bystander, not a Knight in Shining Armor) is something different.

See also I Am Spartacus, which sometimes uses this. If he's the protagonist, then he becomes an Action Survivor. Compare Good Samaritan, Badass Bystander, and Hero of Another Story.

Somewhere between this and a Superhero lie The Real Heroes: ordinary people in jobs that require them to do this day-in, day-out without anyone writing a comic strip about them.

Contrast Never Be a Hero.