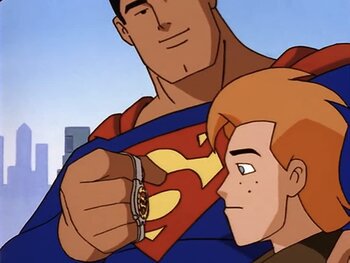 Jimmy Olsen is having a bad week. Lois is sidelining him in favor of a new intern. Tina, the girl he likes, won't give him the time of day. He's having an all-around crisis of confidence. Then Jimmy gets a thank-you from the Man of Steel himself for his help in rescuing civilians on a breaking bridge, and everything changes. When Angela Chen can't get an interview from Superman on his latest rescue, she resorts to creating a story about Jimmy Olsen's relationship to the Man of Steel. Unfortunately, she blows the whole thing out of proportion. Although initially embarrassed, Jimmy comes to enjoy the perks of his new celebrity, until the downsides start rolling in — criminals threaten him and people hound him for favors he can't give. Then the worst happens — Jimmy finds himself kidnapped by Metallo as bait for Superman. Can a photographer save a superhero?