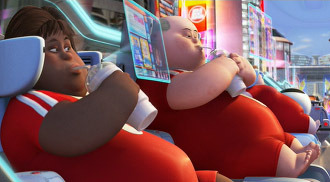 "A study shows that by 2025 American children will be too obese to ride hoverboards."
— Andrea Bennett, The Onion News Network short

Scifi Writers Have No Sense Of Scale: Writing about the Future has always been about taking current trends and assuming they will continue for decades to extreme levels.

One of the current big problems in the United States (and the rest of the developed world) is the growing rate of obesity.

Thus, we have the Big Fat Future — assuming that this trend continues. The new dystopian future doesn't have people starving to death. No, the average person in the future is too full of lard to move. They survive entirely on fattening processed foods and move about using some sort of hover technology. Such settings implicitly assume a degree of Modern Stasis, as they rely on technological solutions to obesity neither advancing nor becoming more accessible with the passage of time.

This is usually played for either comedy (because fat people are still Acceptable Targets) or Body Horror, if not both.

The main character, naturally, has to be attractive. So he will not be one of these future fat people. He'll be unusually thin for his era, or a Fish out of Temporal Water from a thinner bygone era, or a robot or an alien or an AI or something.

Contrast with We Will Have Perfect Health in the Future. Alternatively, it may overlap if the advancement of medical science made the health problems of obesity a worry of the past, which resulted in people caring less about their weight.

May overlap with Stupid Future People.