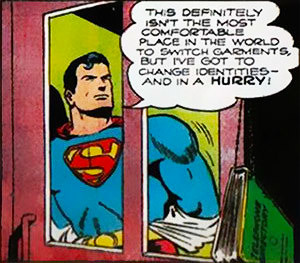 Often, a Super Hero with a Secret Identity faces situations where he must change into his superhero identity, and do so without revealing the identity.

This calls for a Secret-Identity Change Trick, and fast. Usually, the superhero will try any excuse and/or use any situation to his advantage in order to change, such as ducking into a telephone booth to swap outfits. On film, such an act allows for an easy way to have the audience understand where and how the hero changes without needing to explicitly show it (Scene X: Civilian enters phone booth. Camera stops rolling, actor leaves booth, changes clothes offstage, re-enters booth, camera re-starts. Scene X.1: Hero leaves phone booth).

Bruce Wayne Held Hostage is a specific situation where this may be necessary. See also We Need a Distraction. If the hero isn't very good at it, he may claim he needs to go iron his dog.