Literature / All Men of Genius 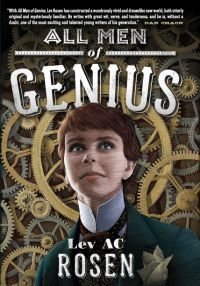 All Men of Genius is a 2011 novel by Lev A. C. Rosen. It has been described as "a steampunk spin on the Victorian comedy of manners", and takes heavy inspiration from both William Shakespeare's Twelfth Night and Oscar Wilde’s The Importance of Being Earnest.
Advertisement:

The book focuses on Violet Adams, an already-skilled inventor who wants to attend the prestigious and selective Illyria College. The problem is that they don't accept women, so she hatches a plan with her brother Ashton to disguise herself as a man and attend under his name. As the year progresses, of course, things get more and more complicated, and it gets harder to keep up the pretence. She and Duke Earnest (the hereditary headmaster) end up falling for each other, only Earnest doesn't know that "Ashton" and his eccentric sister Violet are the same person, and he's consequently quite confused about everything. Plus, the Duke's young ward, Cecily, also thinks she's in love with "Ashton". Meanwhile, Violet is getting caught up in the problems of her new friends, involving various romances and some unpleasant blackmail. Finally, there seem to be killer robots marauding around the basement, a legacy of the current Duke's father and his schemes for world conquest. These plots all come together at the end.

The book contain examples of: