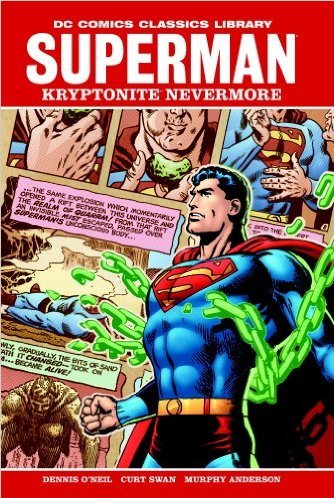 By Denny O'Neil and Curt Swan
Invulnerability...Strength, speed...All these things and many more...combine to make Superman the most powerful being on Earth! But there is another side to the Man of Steel...A dark side hidden from both the crowds of admirers and the evil men who hate and fear him!
Advertisement:

The Sandman Saga, popularly known as Kryptonite Nevermore is a 1971 Superman Story Arc published in Superman (Volume 1) #233-235, 237-238, 240–242, written by Denny O'Neil and illustrated by Curt Swan. Neil Adams illustrated the covers, including the iconic image of Superman breaking his chains. This is the first Superman storyline under Editor Julius Schwartz and the first Bronze Age Superman story.

A nuclear accident converts all the Kryptonite on Earth to iron. Superman's initial joy turns into worry when he realizes something is weakening him. A sand doppelganger is gradually draining his power, and he has to learn how to fulfill his duties in spite of being sensibly weaker and more vulnerable.

The story's goal was scaling Superman's off the charts Silver Age power levels way back to much more manageable levels, returning him to his Golden Age roots and turning him into a weaker but wiser and more human character. However, readers didn't take to this revision and Schwartz was forced to backtrack.

Kryptonite Nevermore was advertised as "A new beginning for Superman"

◊ which would bring great changes to the Super-family

◊. Although Superman got his usual power levels back in issue #243 and the fact that Superman was depowered was never mentioned again, some changes stuck: Clark worked as a newscaster for WGBS-TV until Byrne's reboot, Supergirl was depowered for a while in which she used a Kandorian exoskeleton to be a hero, the Legion of Super-Pets disappeared, and gimmicks like red/green K, time travel, crazy science and super-criminals were strongly reduced.

In 1992, Walt Simonson wrote and drew a post-Crisis version of "The Sandman Saga" in Superman Special.

In 2001, The Superman Adventures did a 2-part adaptation of the story.

In 2009, the storyline was collected as part of the DC Comics Classics Library and titled Superman: Kryptonite Nevermore.

Even as Clark ponders new complications, a blazing sun beats upon the desert... upon a figure in the sand... And then, it stirs... ever so slowly... It is a thing created from soil and rock and a burst of raw energy... cast in the mold of Superman...