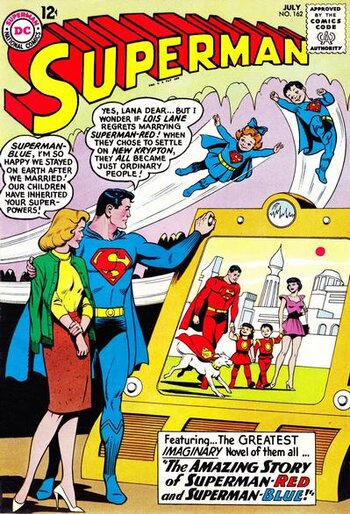 Superman: We're identical except for our costumes! To avoid confusion, I'll call myself Superman-Blue.
Superman: And I'll be Superman-Red! Two heads are better than one! We'll use our super-brains to solve all our problems!
Advertisement:

The Amazing Story of Superman Red and Superman Blue -also known as Superman Red and Blue- is a Superman story published in Superman (Volume 1) #162 (July 1963). Initially an Imaginary Story, it was eventually rebranded as an alternate tale set in Earth-162. The story was written by Leo Dorfman and illustrated by Curt Swan and Kurt Schaffenberger.

Superman is informed that the Kandorians are disappointed at his inability to live up to any of his promises after so many years: he has been incapable of eradicating crime, finding a cure for Kryptonite, un-shrinking Kandor… hence, they are proposing a deal: if he is unable to fulfil his oaths within six months, he will swap places with one Kandorian.

Feeling ashamed, Superman agrees to their request. Then he decides to test an intelligence-increasing device called the "brain evolution machine", reasoning that a bigger brain will let him figure out a solution. Since the machine is an untested prototype, Supergirl wants to test it first, but Superman insists that he cannot allow her to risk her life for him.

The brain evolution machine successfully increases Superman's mental power one hundred times, but it has an unexpected effect: Superman is split into two twins, each one hundred times smarter than the original Superman.

Despite its out-of-main-continuity status, Superman Red and Blue became a pretty influential story in the Superman mythos, being repeatedly reimagined -most famously in the late 90's- and referenced through the decades.