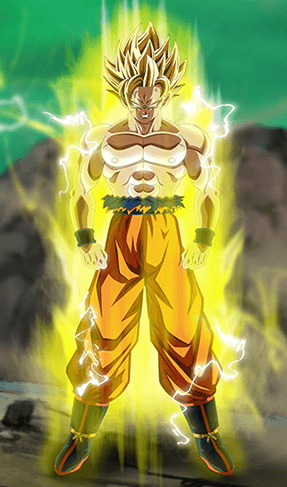 When psyching themselves up for battle, warriors emit a coruscating, Kirlian-like

glow around their bodies. Sometimes the battle aura is a metaphor, and sometimes it is visible to bystanders, who take it as a sign to run away or dive for cover. Either way, it is a sign of great power.

These glows are frequently examples of Good Colors, Evil Colors, with good guys having a blue aura (and sometimes green, white, silver, orange or yellow/gold depending on strength) and the bad guys having a red one. In addition, characters experiencing morality shifts may have their aura experience a Convenient Color Change. This is by no means a hard-and-fast rule though, it can also match the character's "signature color".

In Western Super Hero comics, a similar effect known as Kirby Dots is used to indicate great energies at work, though it's not necessarily restricted to characters; these are primarily a print technique, but have at times been translated into animation in particularly slavish adaptations. In parodies, a common subversion is that the Battle Aura takes up all of the character's power, or otherwise render them actually incapable of attacking.

Often exhibited during the attainment of one's Super Mode. Occasionally manifests as a Sphere of Power or Dramatic Wind. If everyone has one but only certain people can see it, you could be looking at Aura Vision.