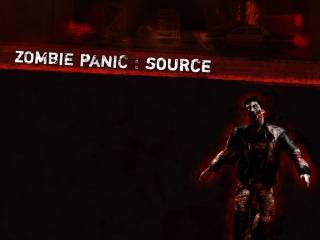 Get Them Brain Dawgs!
— Crackbone
Advertisement:

Zombie Panic is a Half-Life mod created by the Zombie Panic team. Later the team redesignated themselves as Monochrome Games and has released a Spiritual Successor to Zombie Panic titled Contagion. Both Contagion and its first remake, Zombie Panic: Source, use the Source engine. The plot is fairly generic, and in many ways it lampshades many B-Movie horror films.

As a result of an odd Noodle Incident, zombies roam a destroyed earth. A group of survivors needs to fend off a zombie attack until none remain or, alternatively, complete a mission before they are overrun. Zombie Panic allows players to take either the side of the humans or of the zombies, and survivors that are killed respawn on the zombie team. Zombies begin with a "pool" of lives, which allow them to respawn. Once the pool is empty, zombies cannot respawn until more survivors get killed.