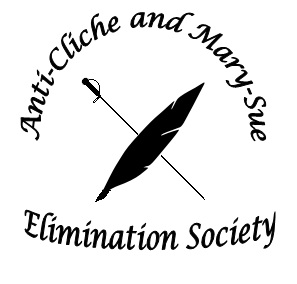 We find the pen to be more or less equal to the sword, actually.
"Welcome to the Society. If you have any sanity left, please leave it at the door."
— Tash
Advertisement:

The Anti-Cliché and Mary-Sue Elimination Society, usually abbreviated to ACMSES or just "the Society", is a Metafictional Shared Universe operated by thirty-some fledgling writers in their teens and twenties.

Originally a short series of crack/parody fanfics making fun of Sueish characters in various fanfiction universes and written by a trio of British girls, the series spread far and wide with the announcement that other writers were free to adopt their premise (and main antagonist). Rather than a small list of under a dozen linear parodies that all followed more or less the same template, the series rapidly ballooned into a full-fledged series of over 200 stories and counting, with a respectable fanbase of its own. Installments are primarily episodic, although there is a strong overarching tale that connects each "season" - sometimes several at once!

Over time, as the diverse cast of characters on both sides of the battle grew, the series' genre shifted over from straight-up parody to a mix of humor, drama, and adventure. It is and always will be about a group of authors who use self inserts to track down and eliminate Sue/Stu-ish characters from various fandoms to prevent them from distorting Canon, but there are especially powerful enemies, characters and authors alike, who support the Mary Sue ideal and would put a stop to the Society's shenanigans. Even more interestingly, there are some who have a personal bone to pick with some of the agents, and that's when things usually get dangerous.

However, even when things are at their most serious, the story remains more or less true to its roots, combining the seriousness and action of an Action-Adventure story with the extremely oddball sense of humor that fanfiction authors develop after a while.

Story quality and writing style can vary from author to author, but each one is nonetheless a gem, guaranteed to make you giggle or your money back!

The series itself gains mixed reviews, mainly positive for its multi-authoral collaboration sense and original motive for removing Sues, and negative for a perceived intrusion into fandoms for the purpose of writing Parody Sues and glorifying their own self-inserted characters and plotlines. Nevertheless, the snarky humor, which is self-deprecating just as often as not, leads one to believe that the hypocrisy of combating Self-Insert armies with more is indeed part of the joke. Add that to the magical tool of Lampshade Hanging (Agent Sues/Stus are blatantly stated to be such and are currently trying to be "rehabilitated", and any positive traits of characters are often reflected as negative) and the fact that most of the extremely powerful Agents have such power offset by their personalities (most of the Agents have been regarded as insane at one point, and there is not a single Agent who has been taken as well to by other characters as the typical Sue), and you've got something to read and chuckle at, if nothing else.

And hey, you might grow to like the self-insert characters anyway. There are quite a lot of them, you know.

The Society is similar to, but distinct from, the Protectors of the Plot Continuum, which has more members and a more diverse history; the Society has more strict requirements for joining.

The link to the wiki is here

For a more linear exploration of the (rather convoluted after a while) plot, and an avoidance of archive binging, a blogspot archive

follows a chronological timeline and updates every three days.

Spoiler tags are used for the end of Season 1 and the major plot points in Season 2.