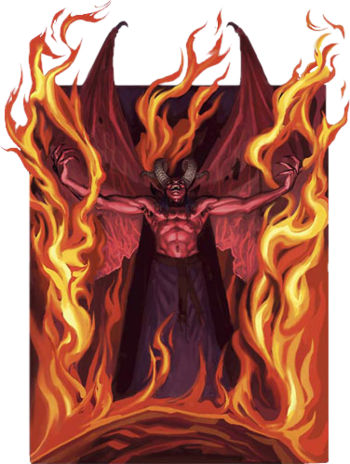 Want to burn asbestos but haven't got the time? Need to Kill It with Fire but regular fire isn't enough?

Fear not! For here at Trope Co., we have the ultimate form of fire, direct from the Fire and Brimstone Hell! And it's available in all standard designer colors! (Blue, green, deep red, and black are our hottest sellers!)

Hellfire is usually presented as an upgrade to normal fire. How it's created/conjured varies from work to work. In some stories it's summoned from the bowels of Hell itself or created by a creature that was born/spawned in Hell, such as demons and the like, including Demonic Dragons. In other works it may be normal fire that's had Black Magic or the dark powers of a nether-realm alloyed to it. The point is, Hellfire is not physical in origin, and doesn't have to play by the same rules as normal fire. Ignition without a source of oxygen? Sure! Scorching things that are supposed to be fireproof or made of fire? You bet! Incinerating ghosts and other things that normal fire can't touch? Oh, hell yeah!

Since Hellfire is often explicitly magical in nature it may also have other effects or the way it does what it does is different from conventional fire. While normal fire might melt something with heat, Hellfire may just disintegrate it entirely. Maybe whatever normal fire affected will be hot after but eventually the heat will die down but with Hellfire, the object may stay hot or even feel cold. More than that, when used on a living creature, Hellfire might not hurt it the same way as normal fire. Instead of burning the body, Hellfire may burn the soul and physical injuries are the result of a wounded spirit that may never heal. This is especially dangerous for characters with a Healing Factor or are Immune to Fire because, if they are caught off guard and take a serious hit, they could die as Hellfire can bypass immunity to natural fire or negate a healing factor (at the very least the Hellfire induced injuries might not heal). In Japanese series, it's often called "Gokuen" (獄炎 "hell flame" or "prison flame").

Notable when it comes from a story without any references to Christianity.

Not to Be Confused with the Hellfire laser-guided missile

, the expansion to the original Diablo, the Toaplan shmup, or the Villain Song from The Hunchback of Notre Dame.

Contrast Holy Hand Grenade and Faux Flame, as well as Holy Water, Hellfire's opposite number in both elemental and sacred terms, and Sacred Flames, its opposite in just the later. See also Greek Fire, a non-magical example known for properties commonly attributed to this trope, in particular being able to burn underwater. Not related to Blazing Inferno Hellfire Sauce. Evil Counterpart and sometimes a foil to Sacred Flames.

Much like how holy water can destroy demons, hellfire is deadly to angels.

Much like how holy water can destroy demons, hellfire is deadly to angels.