Heal It With Fire 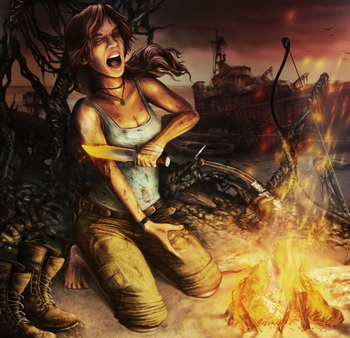 "The sun's fire makes a garden grow,
A forge fire tempers steel.
Why then are you surprised to find
A fire that can heal?"
— The Arbolit, verse 3, from Magi-Nation
Advertisement:

Fire burns, and has been used as a weapon since before recorded history, but sometimes that gets turned around and fire is instead used to heal or treat wounds.

In works that tend towards realism, this most often takes the form of cauterization: the medical practice of searing a wound to prevent blood loss and reduce the likelihood of infection.note It's worth noting that, in modern medicine, this has been largely discredited, at least given the available alternatives; these alternatives may not have been available before the 20th century. In more fantastical works, fire may heal by means of the concept of "purity", burning away contamination and leaving the essence of a thing behind.

A common element with both mundane and fantastic uses of fire to heal is that it causes a great deal of pain in the process, thus lending itself to metaphors about enduring temporary hardship for long-term gain. For similar reasons, it can be an expression of Bad Powers, Good People, with a power that's typically used for harm turned around to heal instead. In other cases, a being who is cursed to be unable to use their power for good may use this form of healing as a kind of Loophole Abuse.

Some attacks, like a Laser Blade or Frickin' Laser Beams, may cauterize wounds in the process of being employed, but that's not typically a case of this trope so much as it is a justification for Bloodless Carnage. Real life laser wounds would actually be a lot nastier than fiction anyway, since they would not cauterize in any helpful way, and there would be gruesome damage from water inside the flesh explosively vaporizing.

Compare Feed It with Fire, where fire or lightning in and of itself has a curative effect.

Related to The Flame of Life, where fire symbolizes life.

Can be an ability of Sacred Flames.

As noted above, the practice of cauterization to close wounds has been largely discredited in modern medicine, so Don't Try This at Home.

Master Chief uses a blowtorch as a temporary means to seal up Riz' wounds after she was attacked by a plasma grenade.

Master Chief uses a blowtorch as a temporary means to seal up Riz' wounds after she was attacked by a plasma grenade.