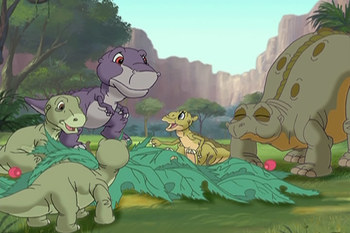 "Observe how the plant eaters share their feeding time with their carnivorous companion with no fear of him turning on them. Truly remarkable!"
Lex: Sh. Sh. Don't let the monsters come over here.
Dr. Alan Grant: They're not monsters, Lex. They're just animals. And these are herbivores.
Tim: That means they only eat vegetables, but for you I think they'd make an exception.
— Jurassic Park
Advertisement:

This trope, along with Predators Are Mean, are a fairly common approach to Carnivore Confusion in fiction. Basically, all the villains are carnivores and all the herbivores, particularly if they can talk, are heroes.

Like Predators Are Mean, this trope has been around for such a long time that it may be one of The Oldest Ones in the Book. Herbivores Are Friendly often, but not always goes hand-in-hand with Predators Are Mean.

This trope and Predators Are Mean are so strong culturally that people assume that many Real Life predators (whether omnivorous or carnivorous by nature) are mean, evil, and nasty, and all the herbivores are cute, cuddly, and friendly.

This trope is not Truth in Television for the most part. Herbivores may attack a human to claim or defend their territory, protect their children, drive away a potential predator, or just because they’re in a bad mood. Indeed, the most dangerous large mammals in the world are actually big herbivores; the hippopotamus and the elephant are known to attack and kill humans even without being provoked. In North America, more people are killed by cattle each year than by bears, mountain lions, venomous snakes, sharks, and alligators combined. In other words, just because an animal won't eat you, doesn't mean it won't hurt you. Conversely, domesticated dogs and cats, both of whom are inclined to be friendly with humans, are inherently carnivorous. Many omnivores, such as the whale shark, are never a threat to humans.

Temple Grandin's book, Animals in Translation, explains that domesticated cattle can be a lot harder to handle compared to most felines (wild or domestic, big, small, or medium). A domestic bovine may attack a person in order to exert dominance or protect a calf, but a tiger will not do so unless its prey drive is triggered, as it is a largely solitary animal that, true to nature of all cats, does not care about social hierarchy.

Some herbivores are portrayed as threatening and aggressive on a fairly regular basis. Boars (technically omnivorous), goats, rams, bulls, stallions, porcupines, rhinoceroses, elephants, hippopotamuses, and gorillas are especially prone to this. When dinosaurs are concerned, you can expect ceratopsians, pachycephalosaurs, stegosaurs, and ankylosaurs to also be portrayed this way. Another common exception, when herbivores are depicted as dangerous, is if they get involved in an Animal Stampede.

Goes hand-in-hand with and opposite of Predators Are Mean. Inverted with Xenophobic Herbivore. Often associated with Carnivore Confusion. Subtrope to Good Animals, Evil Animals, Always Lawful Good, and Virtuous Vegetarianism.