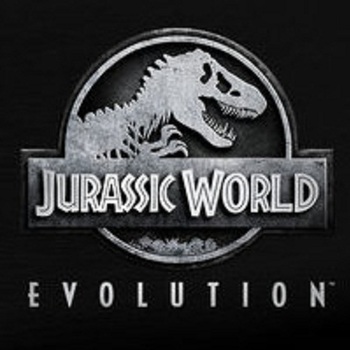 Jurassic World: Evolution is a business simulator based on the Jurassic Park franchise (particularly Jurassic World), and a Spiritual Successor of 2003's Jurassic Park: Operation Genesis. It was released (digitally) for PC, PS4, and Xbox ONE on June 12, 2018, and the physical version for PS4 and Xbox ONE on July 3rd, 2018. It was released on Nintendo Switch on November 3rd, 2020.

Congratulations, on behalf of the InGen Corporation! You are now the proud custodian of a small archipelago just off the coast of Costa Rica, known colloquially as "The Five Deaths". But don't let the name put you off! Play your cards right, and this set of sun-soaked paradises could make you a whole lot of money. How? You're going to make a theme park. Full of dinosaurs.

...whoa, whoa, what's with that expression? I mean, we know, there have been a couple of... minor incidents, when this idea was trialed before. But honestly, there's nothing to worry about! We've accounted for every possible scenario.

Your role will be centred around both park development and park management. Of course, the previous owners of these parks were a lot more incompetent than you seem to be, so there'll be a few minor issues to work out on the islands first - limited building room, severe financial shortfalls, wild dinosaur populations - but then you can work on creating!

Not only will you be creating new infrastructure such as restaurants, shops and viewing galleries for our guest population, but you'll be adding to our dinosaur population as well, through the miracle of our Hammond Creation Labs! Excavating dig sites will give you more DNA to use in bringing back the titans of history, from Velociraptor and T. rex to Stegosaurus and Triceratops!

Each of these animals has certain needs in terms of its food, space requirements and social group sizes, but you'll get the hang of those easily. And our resident head of genetic research, Dr. Wu, has already expressed a potential interest in diversifying our asset count, should you impress him!

You'll also be working closely with the heads of our Security, Science and Entertainment divisions. They'll give you targets to hit: targets hit means more cash allocated which means more dinosaurs! Just be careful. While most of it is likely just empty threats and bluster, some of their underlings do mutter from time to time about "potential sabotage" and "opening gates" if they feel like they're being ignored. As long as you spread your attention between the three divisions, there should be no problems there!

And of course, scientific veteran Ian Malcolm will be there to supervise your progress. Via radio, largely, but the man has a very compelling voice. A few other familiar faces might also check in here and there: Owen Grady and Claire Dearing have raised a few potential concerns about animal welfare, which we're sure you'll dissuade fast.

And that's about it, in terms of your day-to-day concerns! All you have to do is keep the dinosaur population diverse and the guests happy. And watch out for power cuts, and those tropical storms. And make sure there's a tidy profit at the end of the month. And try to make sure you don't run out of space, and that most importantly, all your prehistoric residents remain fed and watered and, most importantly, contained.

The announcement trailer can be seen here

, and the first in-engine footage can be seen here

DLC updates have added new species to the game post-release, including several from Jurassic World: Fallen Kingdom. The game's first story-based DLC, The Secrets of Doctor Wu, was released on November 20th 2018. Its trailer, revealing additional species of "natural" and hybrid dinosaurs, can be seen here

. A second DLC campaign, Claire’s Sanctuary, depicts an adaptation of the events of Fallen Kingdom in which Claire leads you on a mission to rescue Isla Nublar’s dinosaurs from the impending eruption of Mount Sibo, and was released on June 18th, 2019. December 10, 2019 has seen the release of Return to Jurassic Park, where you join Dr. Grant, Dr. Sattler, and Malcolm in repairing and rebuilding the original 1993 park for its grand opening as well as return to Isla Sorna to rebuild Site B, and features the introduction of the Aviary and Pteranodon from Jurassic Park III as well as all of the buildings and aesthetics along with new models and skins for all the dinosaurs from the original trilogy.

We have a T-Rex

In "Jurassic World: Evolution" the game includes the franchise's most iconic and popular dinosaur that is guaranteed to draw crowds from around the world to any park you build, the Majestic and ferocious Tyrannosaurus Rex.

Example of:
King of the Dinosaurs

We have a T-Rex

In "Jurassic World: Evolution" the game includes the franchise's most iconic and popular dinosaur that is guaranteed to draw crowds from around the world to any park you build, the Majestic and ferocious Tyrannosaurus Rex.