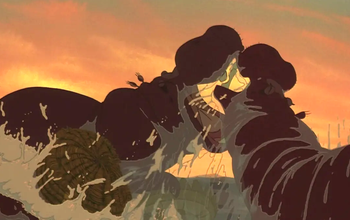 Not even other hippos are safe.
It turns out in the real world, hippos fucking kill people. There's this word, "territorial", that nature takes pretty seriously. When it's applied to a two-ton animal with teeth the size of bowling pins, that is one hell of a word. The sort of word you either pay very close attention to, or end up with a complimentary "Killed to death by a fucking hippo" tombstone. That sort of thing is really embarrassing for the family, you know?
— Cracked, "The 6 Cutest Animals That Can Still Destroy You"

Hippopotamuses in fiction tend to be portrayed in two ways. On the one hand, they're often depicted as friendly, lovable animals, thanks to their chubby, round appearance that makes them look cute. On the other hand—and that's where this trope comes in—they're just as likely to be seen as Xenophobic Herbivores and something completely terrifying.

This is a lot closer to reality when it comes to hippo behavior. Hippos are notoriously aggressive and territorial and can do a lot of damage with their teeth and jaws. Even big predators like lions and crocodiles generally steer clear of them. They are also incredibly fast for their large sizes and small legs. They're considered some of the most dangerous wild mammals in their native range as well as the most dangerous animal (except for disease-spreading mosquitoes) on the entire African continent. Hippos portrayed this way in fiction will often have a Hair-Trigger Temper and be willing to attack anyone who so much as looks at them funny. If they're on the side of the good guys, expect lots of Mooks getting crushed and trampled. If they're bad guys, or just a natural hazard, expect the heroes to face the same situation. A lot of depictions, however, exaggerate the violent reputation of hippos to an extreme—sometimes even depicting them as flesh-eaters (in reality, hippos are herbivores, although they will occasionally scavenge). When they aren't chasing down the hapless protagonists, they'll often be shown fighting among themselves, baring their massive teeth.

Simply put, when they aren't being depicted as cute and friendly, hippos have a tendency to be The Brute and Super-Persistent Predator, with a frequent side of Dumb Muscle.

Compare Cruel Elephant, Rhino Rampage, and Brutish Bulls for other large herbivorous mammals portrayed as violent and dangerous. See also Never Smile at a Crocodile for another aquatic creature that often appears as a danger in jungle settings, and Wily Walrus for another large, dangerous, blubbery animal. Contrast Huggy, Huggy Hippos, even if both can go hand-in-hand.