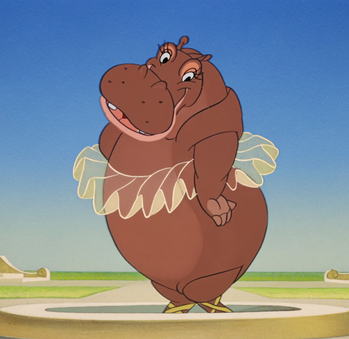 Due to their soft, rounded appearance, sleepy-looking eyes, and big lips that hide their ferocious tusks, hippopotamuses are usually portrayed in media as cute and loveable Big Fun or Gentle Giants. Oftentimes, they will be Always Female, and depicted as a Big Beautiful Woman. Being noted herbivores helps this perception, too.

In real life, hippos are aggressively territorial - far more so than any other herbivore and even notably more so than many carnivores - and one of the most dangerous animals on the planet. They kill more people in Africa than any other large animal, and are capable of biting a crocodile in half. But since hippos are so cute and dopey-looking, this is rarely acknowledged in Fictionland.

, which if anything are slightly more accurate than this actual trope (even if the game relies on this very trope itself, to an extent). Contrast Angry, Angry Hippos, which is much closer to realistic hippo behaviour (even though cute hippos can still be evil, or at least dangerous).