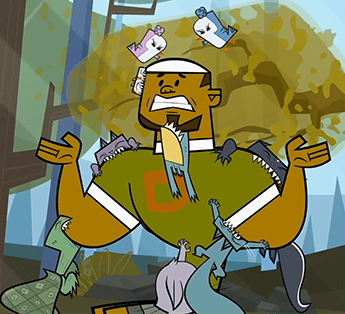 How a character treats, reacts to, and is reacted to by animals delivers a wealth of information to a viewer. The virginal Princess Classic can summon woodland friends with song, the Jerk with a Heart of Gold will (despite hating animals) get Licked by the Dog, while the man in the Black Cloak with a Red Right Hand causes everything around him to wither and die, and even his Right-Hand Attack Dog just won't stop barking at him!

Then there's people who, regardless of their morality or niceness, simply have Animals Hate Him. Always, without fail. Offering a dove crumbs gets them dive bombed and crapped on. Petting a cat will result in getting inch deep claws dug into their leg, if not getting outright bit; and don't even ask what happens when this character is stupid enough to visit the woods or a zoo.

The reason for this animalistic antagonism varies. Maybe they just smell wrong, or 'good'. Perhaps they try too hard, or just have terrible skills at reading an animal's mood. Maybe they're just a Butt-Monkey or Chew Toy. Maybe they were especially cruel to animals in a past life. Sometimes there's no explanation; animals just don't like them. Characters who consider themselves "in tune with nature" a la the Nature Hero or Granola Girl, or "so pure and innocent" that they should receive friendly animal treatment are the likeliest to be treated this way, often to highlight just how out of touch they really are.

That is, this is an animal combination of Everything Trying to Kill You and Hated by All. Compare Scare the Dog, where animals react with terror, not hate, although there is some overlap, and Jealous Pet, for when an individual pet is jealous of someone.

If this trope accelerates into a dangerous level, it becomes an Animal Stampede. See also Evil-Detecting Dog.

And no, they don’t hate him because he learned one weird trick