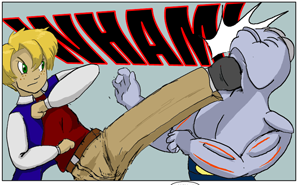 Pokémon don't like him. It's... kind of a reciprocal dislike.
Type:TRAINER

is a webcomic by lilmarisa set in the Pokémon universe.
Advertisement:

Ash is offered a tour at a local university, at Professor Oak's insistence. The dean, a friend of Professor Oak, doesn't have time to give the tour, so he volunteers his son, Oliver, as the tour guide. Oliver seems nice enough, until Pikachu suddenly goes nuts and attacks him unprovoked. Apparently, Oliver's had this problem all his life — no matter what he does, Pokémon all hate him, and most of them will react with violence.

Ash is mortified at the idea of Oliver having to live a life without making any Pokémon buddies, so he vows to find a Pokémon out there, somewhere, who won't attack or run away from Oliver. But he finds that Pokémon much sooner than he expects when events lead to poor Ash trapped in the body of a Pikachu, and captured soon after! To make matters worse, he's been presented to Oliver as a gift!

Alone, unable to speak, and bound to a "trainer" who hates Pokémon training, Ash must work with his new limitations to find a way to regain his humanity.

Hasn't been updated in a long time, sadly.