Video Game / Time: All Things Come to an End 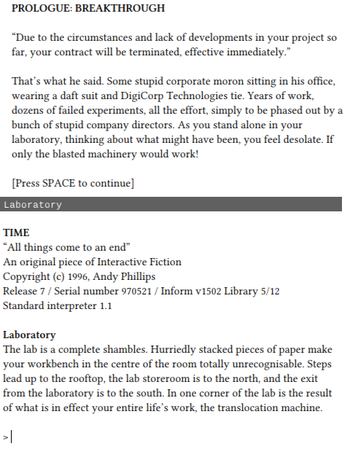 Prologue and opening.
Time: All Things Come to an End is an Interactive Fiction (text adventure) game written by Andy Phillips (his debut title) and published in 1996. The primary genre is Science Fiction (as the name implies, Time Travel is a central theme), and involves an unnamed Mad Scientist protagonist visiting several time periods - a mix of past, present and future - to battle a mysterious villainess intent on ending time itself.
Advertisement:

The game is ultra-linear - to the point the first live NPC you meet cannot be interacted with at all. It is also infamously difficult, even by the standards of an author with a long history of authoring Nintendo Hard games.

More information on the game is available at Interactive Fiction Database

Time: All Things Come to an End provides examples of: