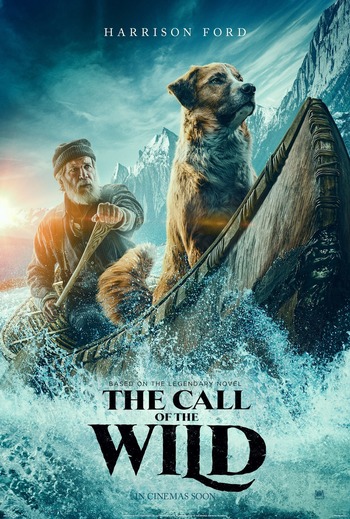 "How do you feel about an adventure, beyond all maps? We could go, you and I, where no one’s ever been before. See what’s out there."
"The Yukon is a dangerous place. You never know what’s coming. I came up here because I didn’t want to be around anyone. And then I met Buck. He was a dog like no other. He’s been spoiled, and he’s suffered. But he could not be broken."
— John Thornton
Advertisement:

The Call of the Wild is a 2020 family adventure film directed by Chris Sanders and written by Michael Green. It is based on the Jack London novel of the same name and Sanders's live-action and solo directorial debut.

A domesticated St. Bernard/Scotch Collie dog named Buck is stolen from his home in Santa Clara, California, and sold to freight haulers in the Yukon during the Klondike gold rush. After being mistreated, he ends up in the care of a lone outdoorsman named John Thornton.

The film stars Harrison Ford as John Thornton, Dan Stevens as Hal, Omar Sy as Perrault, Karen Gillan as Mercedes and Bradley Whitford as Judge Miller. Buck the dog is a CGI character (reference acted by Terry Notary and animated by Moving Picture Company) to render him more expressive and have him do elaborate stunts.

It released on February 21, 2020 as the first film under the 20th Century Studios banner, after Disney declared in January that year that "Fox" is to be dropped from the name of 20th Century Fox. Coincidentally, the 1935 film adaptation was the last film released under 20th Century Pictures before they merged with Fox.

The Call of the Wild contains examples of:

"I never saw him believe in anything as much as he believes in you."
Feedback