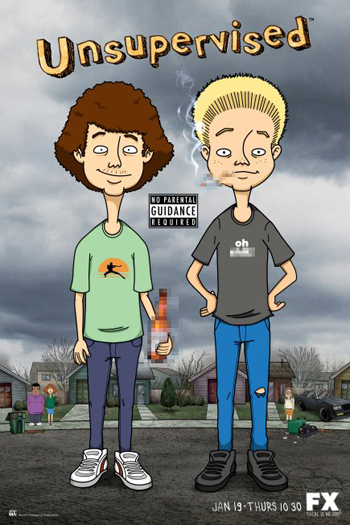 Unsupervised is an animated, half-hour comedy on FX, about two eternally optimistic best friends, Gary and Joel, who are navigating the harsh landscape of adolescence and trying to do what's right despite having no parental guidance whatsoever.
Advertisement:

Gary's father took off years ago and left him with his absentee stepmom, while Joel's elderly parents remain unseen and uninvolved. And the adults who are actually present in Gary's and Joel's lives are anything but role models. At first glance, Gary and Joel's world may be bleak, but their worldview is bright as they guide themselves through life with each other to depend on.

Unsupervised was created by David Hornsby, Scott Marder & Rob Rosell, known for their work on It's Always Sunny in Philadelphia. It is animated by Floyd County Productions, the same studio that creates Archer.

Unlike Archer however, the show never found much success, receiving average-to-negative reviews and suffering from extremely low ratings. It was axed after its first season.