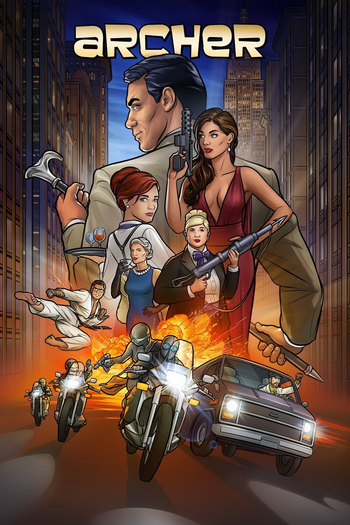 "This is why we can't have nice things."note From left to right: Cyril Figgis, Sterling Archer, Cheryl/Carol Tunt, Malory Archer, Pam Poovey, Lana Kane, and Dr. Krieger. Not pictured: Ray Gillette.
Malory: Most secret agents don’t tell every harlot from here to Hanoi that they ARE secret agents!
Archer: Then why be one?
Advertisement:

You want tropes!? 'Cause this is how you get tropes!

When Adam Reed, the creator of Sealab 2021 and Frisky Dingo, went to Adult Swim with the idea for Archer, a show aptly described as "James Bond meets Arrested Development", the network passed it over. The FX network saw potential in Archer, however, and greenlit the show, which began to air in September 2009.note To their credit, [adult swim] plugs it every so often during their bumps. (Comedy Central also aired reruns from 2015 to 2018.)

The show follows titular protagonist, "superspy" Sterling Malory Archer, an agent for the open-market spy agency, the International Secret Intelligence Service (ISIS; not to be confused with a certain real life Islamist militia), and his random misadventures both inside and outside of the office walls. Archer makes for a well-trained spy—but his Jerkass behavior and his tendency to remain oblivious to everything except himself often renders his competence in the field next-to-useless. One would think ISIS would have fired him or had him eliminated as a liability by now, but...well...the rest of the organization isn't much better.

With Season 5, the show took a departure from its usual approach as a way to prevent Seasonal Rot and started the theme of titled seasons; In the first episode of Archer Vice, the FBI closes down ISIS, pointing out that the agency was never actually legally sanctioned in the first place. As spies with no other job skills, the staff remain in Malory's employ to further help her "dispose" of the leftover evidence in her concealed vault: a literal, not figurative, metric tonne of ISIS-confiscated cocaine, worth about fifty million dollars, literally changing the entire premise of the show from a spy agency to a drug cartel.

The Vice story finished in the season finale, with ISIS, no longer using that name because of the real life terrorist group, heading into Season 6 with a new direction: being subcontracted by the CIA. After a string of failures, they are permanently blacklisted from espionage.

Season 7, Archer, P.I., had the cast move to Los Angeles and start a Private Detective agency.

Season 9, Archer Danger Island, continues the coma theme but goes from noir to Two-Fisted Tales: a tiny pacific island shortly before the outbreak of World War 2 with a new "jungle adventure" themed opening.

Season 10, Archer 1999 likewise continued the coma theme, this season being set IN SPACE!!. This was initially expected to be the final season of the show, but a week before the finale Archer was renewed for an eleventh season that will return the show to its original characters and spy agency setting

Season 11 was set to air on May 6, 2020, but was delayed until September 16, 2020 due to the COVID-19 Pandemic.note Unlike other animated shows, which were able to continue their production mostly unimpeded due to their animation assets being able to be worked with from the animators and artists' homes, the nature of Archer's animation compared to other animated shows could not be worked on remotely.

Season 12 began airing on August 25, 2021 with a thirteenth season confirmed in September.

This series has a character sheet, a Shout-Out page, a page listing tropes found on the characters' Twitter feeds, a page of episode summaries, and even a page examining the show's time period. You can vote for best episodes here

Don't confuse this show with the BBC radio soap The Archers or the Archer Archetype (that's about those guys with the bows and arrows).

Do you want tropes? Because that's where you get tropes:

Malory puts a quarter in her swear jar after saying the F word.

Example of:
The Swear Jar

Malory puts a quarter in her swear jar after saying the F word.