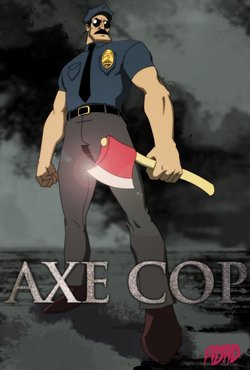 One day, at the scene of a fire, The Cop found the perfect axe. That was the day he became... Axe Cop!
Advertisement:

One of the first shows on FOX's Animation Domination High Def (ADHD) block note created to replace MADtv and compete with Saturday Night Live and Adult Swim alongside High School U.S.A.. Based on the hit webcomic, this series premiered on July 21, 2013. Some changes were made to continuity and character backstories. First-run episodes now premiere on FXX's Animation Domination block.