Cavalry of the Dead 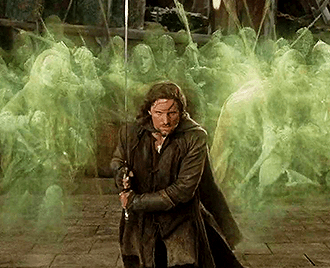 Prepare to be boarded.
"...there was a noise, a rattling sound, and the bones came together, bone to bone. I looked, and tendons and flesh appeared on them and skin covered them, ... and breath entered them, and they came to life and stood up on their feet - a vast army."
— Ezekiel 37:7-10, The Bible
Advertisement:

The Evil Army is about to overrun our stronghold! Hold the Line tactics worked just fine until The Dragon showed up and smashed a bloody great hole in our defenses. It looks like the enemy has won... but wait! The wizard has finished that spell he was working on! There's a horn sounding over the horizon.

Wait... why are all our fallen comrades in the courtyard stirring? Is that army coming over the hills... translucent?

Man, I sure am glad the army of the dead is on our side. They're tearing The Evil Army right up. I sure hope we can keep these guys around! ...What do you mean, "good for one battle only?"

The essence of this trope is: Fallen allies, usually having died either in the battle at hand or in a previous battle with the same enemy, rise temporarily from the dead en masse and contribute to the ongoing battle in some critical way. The undead in question are more likely to be spectral than physical, but both are possible. The important part is that the loyalty of the fallen is preserved. Also, the army of the dead can help win the (usually climactic or highly significant) battle, but they can't then join the standing army. They tend only to last until the immediate threat is vanquished.

The Trope Namer and possibly also modern Trope Codifier is the army of the dead from The Lord of the Rings. However, it's Older Than They Think.

See Also: The Cavalry, Big Damn Heroes, Desperation Attack and Warrior Undead for what the army may be individually composed of. Contrast Animate Dead, and Night of the Living Mooks, where the original loyalty of the raw materials isn't relevant, and Ghost Invasion, which may be the work of a villain. Compare Resurrected for a Job which is useually a singular and 'complete' version to this mass-production, halfway version. If the dead in question died in different time periods, they may also be an Army of the Ages. Related to The Wild Hunt. For villainous examples, see Necromancer and The Undead. Not to be confused with Army of the Dead.