Film / Deathstalker and the Warriors from Hell 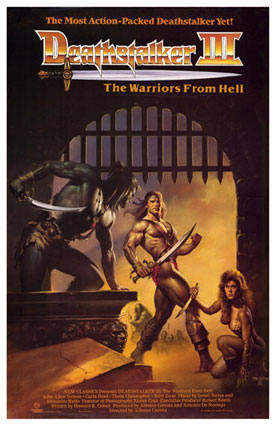 The plot, such as it is, centers upon the Evil Sorceror Prince Troxartas and his efforts to acquire several magical stones that will enable him to Take Over the World. He is also dabbling in Black Magic, which lets him bring warriors he has killed Back from the Dead, so he can build an Invincible Army of the Undead. Deathstalker becomes involved after Troxartas' men try and grab one of the stones from his friend, the wizard Nicias and he is entrusted with a second stone by a dying princess, who was going to use the magic of the stones to find a legendary city full of treasure for her landless people.

Along the way, he gets framed for the murder of the princess, runs into the princess's Rich Bitch twin sister (who is also Troxartas' betrothed), seduces a potato farmer's daughter and - somehow - saves the day.

Filmed entirely on location in Mexico!

This is the only one of the Deathstalker films not available commercially on DVD.

Deathstalker and the Warriors from Hell contains these tropes: