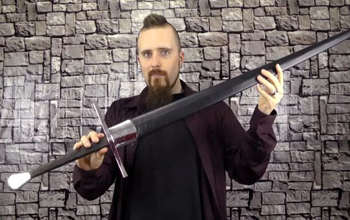 is the YouTube channel run by Skallagrim Nilsson, aka Skall, a YouTuber who has, in his own words, "a camera and a passion for swords, knives, firearms and other weapons / tools, as well as gaming and other random stuff."

Of these, Skallagrim focuses primarily on bladed weapons, offering reviews, demonstrations and testing, myth debunking, and critiques of fantasy weapons based on Skall's experience as a practitioner of Historical European Martial Arts (HEMA). He also demonstrates basic self-defense techniques. He employs friendliness and snarky humor while offering informative content. His spouse, Cara, appears when they are part of Skall's demonstrations.