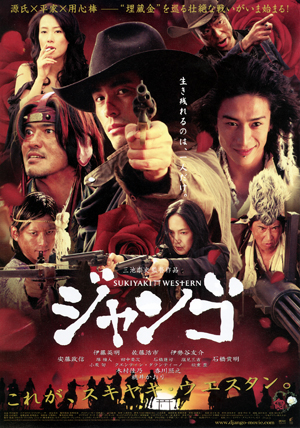 Sukiyaki Western Django is a Spaghetti Western by Takashi Miike starring almost entirely Japanese people, with almost exclusively English dialogue. There are two exceptions to both: one of each of them is Quentin Tarantino, who opens the film in a flashback where he tells the age-old tale about a war, a recurrence of which he takes part in much later in his life. He then throws an egg in the air, shoots 3 people whose blood splatters the backdrop, and then extends one hand to catch the egg to an accompanying slide whistle. It's that kind of movie.
Advertisement:

The film takes its plot from the Spaghetti Western film genre - Django, among others, hence the name, although significant plot elements come from Yojimbo and its de facto remake A Fistful of Dollars: sukiyaki

is a hot pot or "steamboat" dish often used as a generic label of "Japaneseness".