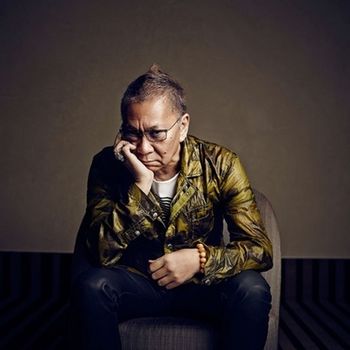 Takashi Miike (born August 24, 1960) is a highly prolific (and highly controversial) Japanese auteur. He takes his primary influences — David Lynch, David Cronenberg, and Paul Verhoeven — and turns their most transgressive elements Up to Eleven in many of his films.

He has directed several movies a year since his first release in 1991, as well as a handful of television programs, for an average of about 3-4 a year; starting soon after graduating Yokohama Vocational School of Broadcast and Film, where he studied under legendary Japanese filmmaker Shohei Imamura. Although the bulk of his work are theatrical releases, mainly Yakuza action films, he also produces a considerable number of Direct to Video V-cinema releases as well. The former are often used to finance the latter, which he claims he does because they allow him more creative control, and greater freedom from censorship and traditional narrative structure.

Both inside and outside Japan, he's best known for Black Comedy, over-the-top violence and Gorn, but his films cover a much wider range of genres and styles. Along with his signature action and horror, he's also produced examples of period dramas, sentimental road pictures, teen dramas, more traditional crime dramas, children's movies, and some that defy any attempt at labeling, such as the live-action/claymation horror comedy musical The Happiness of the Katakuris.

His V-cinema releases, despite frequent extreme depictions of violence and sexual perversion, are often philosophical explorations of the darker side of the human psyche.

He's also cameo'd as an actor and voice actor in various works, most notably as himself in No More Heroes 2: Desperate Struggle, which fits the tone of the game perfectly.