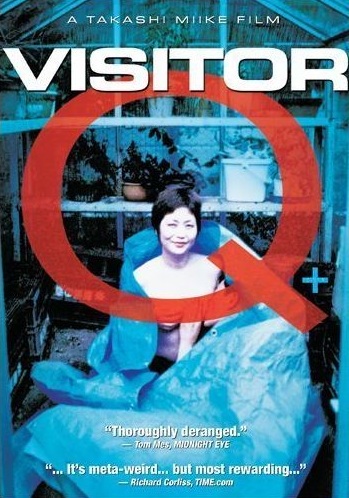 Visitor Q is a very darkly comic and highly controversial Japanese V-Cinema film created by auteur Takashi Miike. The movie starts with a documentary filmmaker having sex with his teenage prostitute daughter. On his way home, he's attacked by a seemingly random stranger who knocks him senseless with a large rock, before delivering him to his house. The stranger immediately begins with the man's Dysfunctional Family — which includes his prostitute daughter, prostitute junkie wife, and abusive son. All the while, the visitor is videotaping him and his family. And that's just the start of the film. It is infamous for its rather disturbing scenes of odd fetishes and violence; and was included on a list of the top 25 most mind-bending movies in the June 2010 issue of FILM magazine.