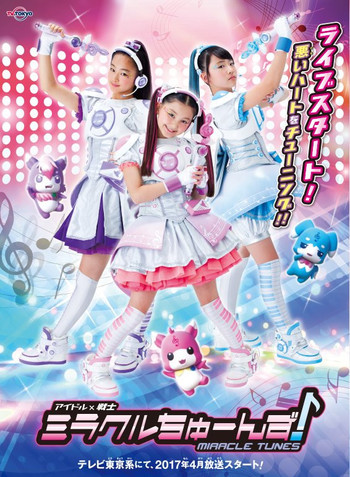 Idol x Warrior Miracle Tunes! is a Japanese tokusatsu series which aired from April 2017 to March 2018 on TV Tokyo. It is the first installment of the Girls x Heroine! franchise created by OLM, Inc. and Takara Tomy with cooperation from Shogakukan (who ran the manga and held the auditions) and LDH (who choreographed the dances). The series is directed by Takashi Miike.

The Demon King and the Dokudoku-dan have stolen the Music Kingdom's Sound Jewels and converted them into Negative Jewels, which cause anybody who touches them to turn into a Negative Jeweler. Poppun, Rockie, and Clanosuke are sent by the goddess of the Music Kingdom to recover these jewels. Meanwhile, Kanon Ichinose and Fuka Tachibana audition to be part of Mai Kanzaki's new idol group, Miracle2. The audition is used to recruit the them as Idol Warriors called Miracle Tunes.

The show was a Sleeper Hit and found a lot of success with the main demographic in Asia. It also received two different manga adaptations. Miracle2 was also Defictionalized and the group debuted in real life as their characters. The show received a European remake, "Miracle Tunes!".